During FY16, the Ability Indiana Board launched an initiative to create increased awareness of the Program at the local level of government by “recognizing and awarding” cities as an Ability City.

The goal is to continue increasing awareness across Indiana cities regarding inclusion of individuals with disabilities through multiple employment opportunities. Many of the opportunities created by Certified Ability Indiana Organizations continued to grow over the past years.

While several Certified Ability Indiana Organizations currently create products and/or provide services for local municipalities, the Ability City program is expected to continue to grow in the future creating more awareness and opportunities for the Ability Indiana Program. Currently Indianapolis, Fort Wayne and Evansville have been recognized as Ability Cities. 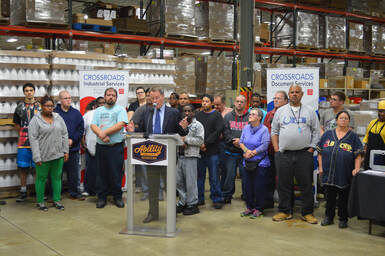 Indianapolis - October 12, 2016
​Mayor Joe Hogsett joined Ability Indiana to designate the City of Indianapolis, the first “Ability City” in Indiana.  The designation recognizes the City’s long-standing commitment to supporting the employment of Hoosiers with disabilities at employment centers across Marion County.

​​“Indianapolis thrives when all of its residents are given the opportunity and means to thrive,” said Mayor Hogsett.  “Ability Indiana brings together a willing and capable workforce with the needs of the business world, helping to lift all Hoosiers through hard work and meaningful private-public partnerships. I am proud that Indianapolis is now recognized as a leader in supporting employment for all individuals throughout our city, including at places like Crossroads Industrial Services.”

Crossroads Industrial Services, a division of Easterseals Crossroads, has been providing employment opportunities through its manufacturing of quality products, for almost 80 years. Crossroads partners with the business community to provide supply chain solutions including warehousing, assembly, packaging and shipping, and manufacturing.  Every employee of Crossroads, and similar employment centers, competes in the local economy based on quality and performance.

“Employment centers like Crossroads Industrial Services, are a critical part of this city’s economy,” said Mike Cruz, Chairman of the Board of Ability Indiana.  “The City of Indianapolis, through its supportive policies and the participation of the business community, helps turn “disability” into “ability” for many of our neighbors at facilities like this every day.”

“We have a proud tradition at Crossroads of strict standards equivalent to the best in any industry,” said Curtiss Quirin, COO of Crossroads Industrial Services.  “We will match the performance of our workforce against any in the city.” 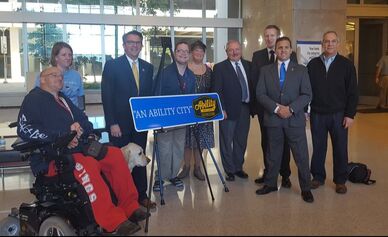 “Employment centers like the Evansville Association for the Blind, and many others, are a critical part of this city’s economy,” said Karla Horrell, executive director of EAB.  “The City of Evansville, through its supportive policies and the participation of the business community, helps turn “disability” into “ability” for hundreds of our fellow Hoosiers every day.”

The Ability City designation is reflective of the larger effort to make Southwest Indiana businesses aware of the contributions that Hoosiers with disabilities make, by providing quality goods and services that help clients across the region.

October is Disability Employment Awareness Month. More than 80 area CEOs are met on October 24, 2016 to hear presentations on how employing Hoosiers with disabilities makes sense for their bottom line as well. Mayor Lloyd Winnecke accepted the designation, only the second of its kind in Indiana, on behalf of all residents of Evansville.

“Anyone, regardless of their disability, should have the opportunity to reach their full potential,” said Mayor Winnecke.  “Ability Indiana brings together a willing and capable workforce with the needs of the business world to lift all Hoosiers through hard work and a can-do attitude.  I am proud that Evansville is now recognized as a leader in supporting employment for Hoosiers with disabilities.” 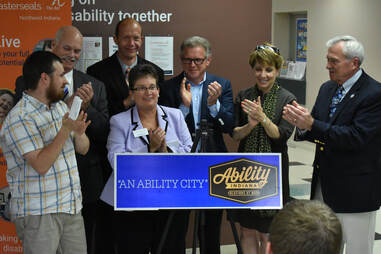 Mayor Henry was joined at the announcement by officials from Ability Indiana, elected officials, community leaders and several local organizations to demonstrate a collective commitment to ensuring individuals with disabilities have opportunities for employment and success.

“Being an Ability City speaks volumes about our commitment to being a caring, giving and welcoming community,” said Mayor Henry. “Fort Wayne is a leader in job and business growth. It’s because of companies and organizations in our City have stepped up to include and embrace individuals with disabilities to be part of our local employment base.”

Fort Wayne is the third city in Indiana to be recognized as an Ability City.